How I lost 175 pounds in Two Years

Growing up I was always a slim kid, (you know being poor and all) it wasn’t until I reached high school did I begin to pack on the pounds. Fast forward to early adulthood and I’m certified obese. What happened? Did I just wake up overweight? Did I binge eat my way into fatness? Was it depression and other mental issues? Was it the alcoholism. The short answer is a combination of all the above. I won’t get into the extreme details about “Why” and “how”, this is supposed to be a motivational post about my weight loss journey, so let’s start there.  In late 2015, I found myself with breathing issues, skin problems, lower back pain, high blood pressure, high cholesterol and a myriad of other health issues. I had a fatty liver, and weighed in at a staggering 340 pounds. I was the only person I knew that was 25 and on blood pressure, and cholesterol meds. I would sweat while I slept, I had sleep apnea I was a mess! The tipping point for me was when my family brought me a bunch of interview clothes because I was looking for a job (until then all I would wear was sweats because that’s all I could find that would fit me). We ordered the clothes online and I chose the sizes I best thought would fit me. When the clothes arrived from Old Navy I tried them on, and was devastated! I could no longer fit a 4xl shirt! None of the clothes fit and worst of all I wasted my family’s money. I was so depressed and boiling angry at the same time. My first thought was to just throw the clothes away, or at the very least return them all. My brother said no. Keep the clothes and find a way to fit them. So, I committed. My diet at that time was horrible! I ate fast food for every meal of the day. Hotcakes with extra sausage from McDonalds for breakfast. KFC hot wings, chicken tenders with potato wedges for lunch, and Domino’s Pizza for dinner, and I mean a whole pizza not just a few slices, and I also drank soda with every meal. I would get up sometimes at 1am, drive to McDonalds and order a 20 piece nuggets with a large fry and coke, and finish it all in the car before I even got back home! I really had no direction or guidance on how to approach this lifestyle change so I just started off slow. I went to my grocery store and picked out a bunch of the healthiest TV dinners I could find, and I just ate them. I knew it wasn’t the best plan, but I had to get my body used to eating smaller meals, and NOT eating out. I also cut all calories from drinks, and only drank water with my TV dinners. I lost 20 pounds the first month! This really motivated me to keep going and step my meal game up. I ditched the TV dinners and did extensive research on meal planning, and began to meal prep. I would buy a large pack of boneless, skinless chicken breast, along with ground turkey and lots of veggies. I would cook it all on Sunday, and make enough for about 5 days, freezing the meals in between. At this point I was tracking everything very carefully, I kept a food diary, and weighed myself every morning and documented it. By June 2016 I had lost 70 pounds. I kept going and the more I learned about food, and the more food labels I read I started making various adjustments in my diet. The hardest part honestly is the mental barriers that we have. We Americans have been more than spoiled when it comes to food, and the way we look at food is almost sexual. We associate food with pleasure, with reward, with temptation, with tradition. We associate food with so many things other than food that it makes it near impossible to feel any other way, and I was no different. I had to literally retrain my brain, and change how I looked at food. Food for me shouldn’t be a reward, it shouldn’t bring on a release, it shouldn’t be a coping mechanism it’s fuel and nothing more. 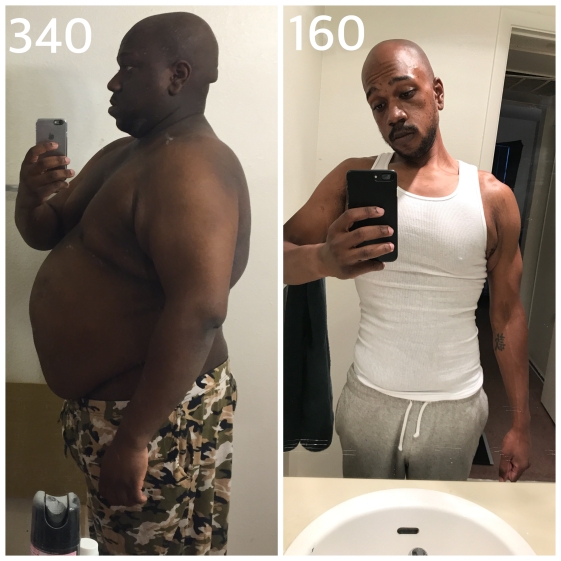 Once I started thinking like that, it actually became, (dare I say) fun to eat healthy. I felt excited to eat the same meals every day because I knew they were healthy. I couldn’t tell you how many times I used to order some greasy junk food knowing that it’s going to make me sick, and knowing that it’s no good for me, and after I ate the junk I would feel like crap. At the end of 2016 I weighed in at 180. And mind you this was all WITHOUT going to the gym. Yes, I lost all the weight in the first year by simply changing my diet. At the beginning of 2017 I started hitting the gym hard, and as of January 2018, I’m weighing in at 165.