The Voices In Your Head Are Real!

Growing up is difficult enough, but true challenges arise when you’re a pre-teen that’s quickly snatched away from everything that made you feel comfortable in life. Your school, your friends and everything about a city that felt familiar to you, and speaking from experience coping with change, as a child is easier said than done. With that being said I introduce you to Riley voiced by Kaitlyn Dias, a once exuberant adolescent enjoying her young life in Minnesota, before being drug to the west coast with promises of a greener side of grass. Inside Out’s depiction of the human psyche is truly mind blowing (no pun intended). Inside of Riley’s head is an entire ensemble of human emotions that operate at a control deck they call headquarters, which houses many of Riley’s core memories. Starting with Joy (Amy Poehler) Riley’s happiness, then Disgust (Mindy Kaling), Fear (Bill Hader), Anger (Lewis Black), and Sadness (Phyllis Smith). The voice acting is perfect and each emotion has an interesting personality that shines through Pixar’s legendary animation. Riley’s mind is full of creative ways to depict a certain emotion or act. For instance just outside of headquarters are the Islands of Personality, consisting of five (at first) islands that light up and glow with activity when utilized. The islands represent the different pieces of Riley’s personality that define her as a person. There’s Family Island, Goofball Island, Honestly Island and Friendship Island. This is truly a classic Pixar experience that ONLY rivals their long list of many other classics. Everything is going along good enough, it’s not until sadness gets a little too touchy-feely with Riley’s memories do things start to go awry. For some reason when sadness touches Riley’s memories they turn into sad memories, on one occasion leaving Riley crying in the middle of class on her first day of school. 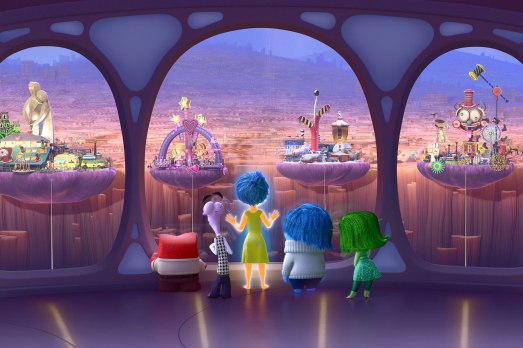 When Joy tries to stop another one of sadness’s blunders, they both find themselves in lost Long-Term Memory. An almost endless supply of memories as far as the eye can see, beautifully depicted as 70-foot high colorful bookshelves. This change of venue doesn’t bold well for Riley, Joy and Sadness are lost in translation, leaving Fear, Anger and Disgust at the helm. Director Pete Docter (Up, Monster’s Inc.) was definitely working from experience with Inside Out, as he too relocated with his family to another city, resulting in significant issues at school. Speaking of issues due to the absence of Joy, Riley’s behavior immediately begins to become problematic. Disgust, Fear and Anger TRY their best impression of Joy but only end up making things worse by having Riley snap at her parents, resulting in a pre-teens ultimate demise, being sent to her room. Joy and Sadness desperately try to make their way back to headquarters as they notice that the Islands of Personality start to crumble and fall into the memory dump, an abyss of forgotten memories. 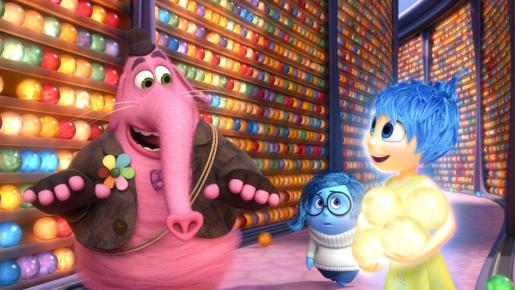 On their voyage back to headquarters they Joy and Sadness run into Bing Bong, an old imaginary friend that cries candy when he’s sad, the candy aside he seems to more trouble than he’s worth. Wonderfully voiced by Richard Kind, Bing Bong who has been forgotten for a long time is more than happy to help the two, with hopes of being placed back into Riley’s core memories. He advises them that the fastest way back to headquarters is to take the Train Of Thought, but on the way, the imaginary goof leads the two on a series of close calls. The ride is only 94 minutes in run time but it feels much longer. He encourages them to follow him into Abstract thought as a shortcut, once inside the door closes behind them, and they have to resort to being flattened into 2d objects to escape. When Joy and Sadness try to wake Riley up, Bing Bong crashes the set at Dream Productions, a place resembling a Hollywood studio where dreams are created (genius!). Bing Bong even gets himself thrown in Riley’s sub-conscious, he has Riley’s core memories with him so Joy and Sadness have to spring him, but in the process they unleashed a suppressed memory of a creepy clown, effectively waking Riley up.

Things look grim when Joy finds herself in the Memory Dump, and Fear, Anger, and Disgust effectively get Riley to run away from home. This entire film just breaths vibrancy, and wonderment. Literally every aspect of the human mind is accounted for and represented in an unbelievably creative way. While watching Inside Out I quickly got that nostalgic 90’s feel, when I was a pre-teen and this type of animation felt new and fascinating. In many ways it still is, I have absolutely nothing to complain about with Inside Out. This films final act is not only a must watch, but beautiful and important. At the end of the day, and at the end of the film Pixar reminds us that it’s ok to feel sad sometimes.