Moonrise Kingdom is a touching coming-of-age film set in the summer of 1965 that paints a visual mural of nostalgia. Beautifully written and directed by Wes Anderson (The Grand Budapest Hotel), Moonrise Kingdom was able to accurately capture the essence of childhood, and prepubescent love. Within the first 20 minutes of the film I was immediately brought me back to my middle school summers of rambunctious but unsuccessful girl chasing. I only wish I had attended camp or joined the boy scouts to get a taste of the outdoor workmanship that Sam demonstrated. Sam Shakusky played extremely well by Jared Gilman, (in his feature film debut mind you) is an orphan that has just been cut loose by his foster parents. He quits the scouts at the beginning of the film, and goes on the run to meet Suzy, played by Kara Haywood (also in her feature film debut) who did a great job of portraying the troubled, but interesting love interest of Sam. She fancies vinyl records and books about people with super powers. The rest of the cast is full of stars Bill Murray, Bruce Willis, Frances Mcdormand, Harvey Keitel, and Edward Norton. The latter of which sends a search team of scouts along with Captain Sharp (Willis) to locate the missing children. 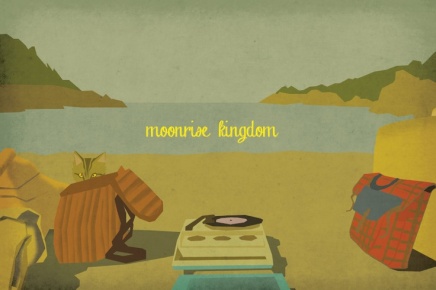 The narrator was a nice touch, setting the tone and providing some insight and even giving a mini tour of New Penzance. One thing I loved about the film was the way it was shot. Certain parts of the film seemed to be shot on a 2d style plane, as if you were looking at a play or musical. Getting back to the manhunt or boy-girl-hunt, the two run away lovebirds are soon approached by the rest of the scouts in the middle of the forest. Needless to say the confrontation ends with bloodshed. Kara Haywood is excellent at selling the whole “plight of the misunderstood” persona. Mr. and Mrs. Bishop (Murray & Mcdormand) are both lawyers with obvious issues with each other, so obvious that even Suzy sniffed out Mrs. Bishop’s outside indiscretions. The veteran actors each played their roles well, but it was the adolescents that stole the show here, from Sam & Suzy to the boy scouts the young actors gave the veterans a run for their money in this film.

The third act is where Moonrise Kingdom really turns the heat up. The film throws the entire kitchen at you with everything from a massive storm, a mass evacuation, and heck Sam even gets struck by lightning (he lives). Through all the madness Sam & Captain Sharp build a bond that will soon become golden, one that will keep Sam & Suzy in each others lives for years to come. The film’s point is simple and can be summed up in two words, young love. At the end of the day, and at the end of the film Moonrise Kingdom beautifully reminds us that our childhood is both wonderful, and entirely too short.